The Stupid is Strong with this Prosecution

I'm amazed that even TWO jurors are holding out for conviction - and, it's said that they are doing so to prevent being targeted for mob action.
Now, it's 50-50 that this will  be a hung jury. That would leave it to the judge to step in, and provide a directed verdict, freeing Rittenhouse. Well, freeing him to face many, many civil suits. If he is not tied up in various courts for some time, it won't be the fault of The Vindictive Left.
This is not new. The Dems have been doing this for some time.
Also, they have been using mob action to bypass fair trials. The "change" that supposedly occurred during the Kennedy years and shortly after, during LBJ's term of office, whereby the GOP became the "Bad Party" that contained all the Racists, and the Dems became the "Good Party" that just LOVED Black People (yeah, right), was always false.
This trial was 100 years ago. When the mob gathered outside of the courthouse, the judge ORDERED the jury to convict - which, they did. So, jury intimidation is not a new practice for the Dems and their allies.
Will there be a secession? Unlikely, at least in the armed, Blue vs. Grey sense.
However, one of the commenters points out, that this split in orientation is NOT by region, but a case of the very big cities against the rest of us. What MAY happen is that the states dump the big cities, and go their own way. Just cut them out of the equation, and run the state without their vote or input.
The fact is, most large cities are a drain on the state's finances. They COST more than they contribute. So, reconstituting separately from the large cities might be the smartest thing ever.
Most of the more profitable businesses moved out, long ago. The airports located outside of the city's boundaries, in many cases (In Charlotte, NC's case, part of the city airport land is actually located in SC. Amazingly, the two states have cooperated in sharing planning, revenue, and other issues.)
So, dumping the cities might be the best thing that ever happened to the residents. It would be a massive wake-up call for all involved. Many of them, deprived of the influx of cash from the state and county, might eventually become another Detroit - depopulated and actually functioning BETTER without all the "helpful government".
Here is the Detroit The Left would LIKE you to think of, when you hear about the city: 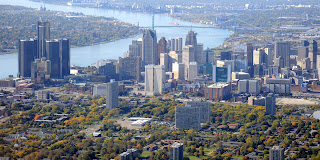 But, here is the REAL Detroit. 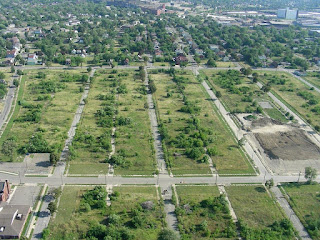 Outside of the central city parameters, essentially depopulated.
Here's a link to information about the partisan folks that are skewing news coverage.
Here is the actual downloadable report.
Another CYA report The Left would LIKE you to buy into.
I really can't wait until all of these Lying, Cheating politicians are out of office (particularly if they are replaced with some honest outsiders). The opportunity to clear the air about racist accusations, and correct a very dishonest record would be priceless.
However, any hope of honest elections is far away, as long as the FEC is permitted to 'include' foreigners as voters, for the purposes of ballot initiatives. What part of "voting rights are for actual CITIZENS" is not completely clear?
I would love to see the opportunity for court oversight of elections, but I am not all that confident that they would do the job correctly. However, the principle of Federal oversight of elections, when they disenfranchise citizens, is clear, well-established, and both has precedent and black-letter law on its side.
I'm re-reading Enemies Foreign and Domestic, by Matt Bracken; I enjoyed it the first time, and it's both been long enough for me to enjoy reading again, and a good book - interesting and timely - enough so, when I am waiting online or on the phone, I will be lulled into a mood that will resist the urge to jump down the throats of those making me wait.
In short, I'm using it as a pacifier. Well, it beats taking up smoking again.
Posted by Linda Fox at 9:21 AM

Linda Fox
I'm a retired Science teacher (mostly Physics and Chemistry). Wife, Mother, Grandmother, and Great-Grandmother (my daughter married a man with a child). I recently moved back to OH, and have been busy setting up the new house (furniture, office, garden). I am now calling myself a Member of the Unauthorized Press. Proudly Dissident since 2001.