Mass Number of Women at Work - What Happens?

I just noticed something about the TX Democrats that fled the state rather than do their job. They are overwhelmingly female. 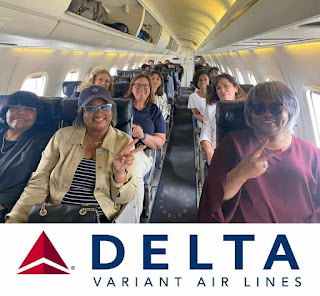 Now, for many people in different places of work, the response would be: So What? But, I'm not most people. For me, this is unusual.
I'm an outlier.
Formerly, I worked in IT, installation and repair, programming, network management, and database creation and management. From there, I moved on to teach in science departments (the physical sciences, which is even more heavily skewed towards males than the biological).
And, now retired, my hobbies are computers (multi-platform, including Linux and Raspberry Pi), blogging about politics and culture, writing suspense and thrillers, and operating a ham radio.
In every one of those avocations, males outnumber - sometimes heavily - the women in those hobbies. The average woman works in departments/fields where the skew is the opposite.
So, most women at work are experiencing an environment in which the associations, and the feedback, represent the female point of view.
Women in groups operate in a well-known manner; when a woman complains about a situation - whether personal and private, or somehow related to her job, the goal of other women is to validate that experience, and compete to offer reassurance for her feelings. Failure to do so will result in your banishment to the edges of that group, and, if continued, complete isolation.
The price of isolation is not one that most women will endure without cracking and capitulating.
In short, women work hard - Olympic-level competition - to out-empathize each other. It quickly descends into an orgy of man-bashing, competitive revenge fantasies (similar to Waiting to Exhale), and verbal support of plans to retaliate on the 'offenders' who have injured the amor-propre of the involved woman.
Hence, the TX legislators who fled the state are acting in concert with fellow women. They talked themselves into that joint act, and will spend their time on the road providing verbal support, justifying their rash action, and growing even more united in this misguided, and quite possibly illegal, act.
They would need a greater mass of men to this female-centric process. Although there are men pictured on some of the photos of their madcap escape, I think it's obvious that those are men who managed to insert themselves into the gyno-group, and who are content to go along with the crowd.
Now, what does this mean?
Maybe not that much. But, take a careful look at many of the groups that exhibit the most extreme political orientation (and the willingness to act).
They are, almost always, female-centric - HR and other support staff, education, fashion, media, NGOs, and state/local legislative bodies - these are well-known examples of the composition of these cohesive groups. They are female-led, with well-defined pecking orders that are populated with associations designed to provide emotional support for the group, particularly the leadership. Forget Yes-Men. Yes-Women are more common - and even more fervent in their willingness to abandon principal to gain closeness to the decision-makers.
Unlike male-dominated groups, or even less-one-gender groups, these alliances will fight the open challenges and temporary discord that accompanies brain-storming, solution-finding, or other activities that are designed to bring out minority ideas and viewpoints.
No, for female groups, consensus is the key. And, that consensus is likely driven by desire to emulate the leadership in their biases and even their most extreme plans. No nasty divergent thinking for these groups!
Now, do the otherwise inexplicable outbreaks of nuclear-level Leftist/Woke activism make more sense?
It's not about the outrage; it's about the players, and the feedback on their outrage from their peer group.
Posted by Linda Fox at 1:33 AM

Linda Fox
I'm a retired Science teacher (mostly Physics and Chemistry). Wife, Mother, Grandmother, and Great-Grandmother (my daughter married a man with a child). I am now calling myself a Member of the Unauthorized Press. Proudly Dissident since 2001.